Many a newcomer to the Manx Grand Prix has dazzled during practice week learning the mountain course quick and setting highly creditable lap speeds.

This includes Malachi Mitchell Thomas quickest in newcomers A class with lap speed of 115.306 mph on Silicone engineering racing ZX6 Kawasaki. Malachi had a successful Southern 100 debut in July recording 7th and 6th place finishes in supersport races and has adapted fast to the most famous road race circuit in the world.

Billy Redmayne has also being hugely impressive recording lap speed today of 114.578 mph proving that he will arguably start one of the favourites for newcomers A Manx Grand Prix victory. Shane Egan 2013 Irish road race senior support champion is currently third fastest overall in newcomers A having lapped at over 113 mph whilst Matthew Rees has lapped in the 112 mph bracket. 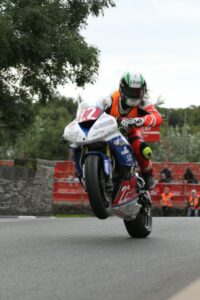 Marco Pagani ZX6 Kawasaki mounted has lapped at 109.375 mph to prove he could spring a surprise or two in newcomers A race whilst Craig Neve competing on Call Mac Scaffolding backed CBR 600 Honda impressed today lapping at 109.963 mph close to the 110 mph mark.

Sam West has being greatly looking forward to his Manx Grand Prix debut for the whole year and the rider who has an excellent racing pedigree has lapped during practice at 111.173 mph. Newcomers B practice has seen Dean Osborne lap over 106.5 mph on full factory winners wear backed ER6 Kawasaki as Charles Rhys Hardisty, Barry Furber, Eddie Venn, Jack Hunter, Aaron League and Stephen Nathan have all set highly creditable lap speeds.

James Caswell Cox leads the way in newcomers C class having produced a lap speed of 99.843 mph close to achieving the unique 100 mph mark around the mountain course. Lancelot Unissart who impressed at Southern 100 is second fastest following lap speed of 98.752 mph as Gav Brown, Leon Murphy, Andrew Cowie and Sam Johnson have all proved they have what it takes to be in the running for standout results in newcomers C race.