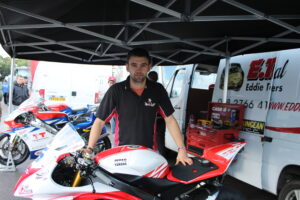 William Dunlop has joined the Tyco Suzuki by TAS team for next years Isle of Man TT. William has in 2013 had a fantastic season of road racing which has included achieving wins at the Armoy road races, Cookstown 100, Walderstown road races and at the Ulster Grand Prix. This years Isle of Man TT saw William record 3rd,4th,7th,9th,9th place finishes in the superbike, supersport, superstock and senior TT races.

The Tyco Suzuki by TAS team have a fantastic record at the Isle of Man TT which has included winning back to back senior TT races in 2003 and in 2004. Plus the team has over the years run the likes of Ian Lougher, Bruce Anstey, Cameron Donald and Adrian Archibald. Now William Dunlop is joining up with the team, its a formidable combination combining the experience of the Tyco Suzuki by TAS team and the undoubted talent of William Dunlop, 2014 looks like being a good year for both team and rider at the Isle of Man TT in 2014.