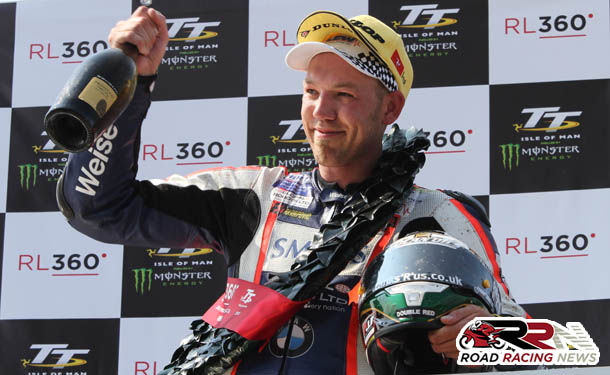 After three class lap records from three races, could the Royal London 360 Quantum Superstock race produce more of the same at TT 2018?

Yet again it was Silicone Engineering Racing’s Dean Harrison who lead the charge to Glen Helen, moving into a race lead of 3.5 seconds over Michael Dunlop, who in turn held a 1.59 advantage over RAF Regular & Reserves Kawasaki’s Gary Johnson.

Onto Ballaugh Bridge and race leader Harrison got the lead up to in excess of four seconds, whilst Bathams SMT Racing’s Michael Rutter moved up to third just in front of James Hillier.

By Ramsey Hairpin the race lead grew to almost five seconds, whilst Smiths Racing’s Peter Hickman hitting the sweet spot with his form following an early overshoot at Braddan Bridge jumped up to third, as Rutter dropped back to fourth.

Harrison maintained a lead of around five seconds by Cronk Ny Mona, which by the end of lap 1 was reduced slightly by Dunlop, taking the Bradford racer’s advantage down to 4.3 seconds.

Peter Hickman occupied third and after his early lap mistake was only 3.3 behind Dunlop. Concluding the top six were Rutter, Padgetts Conor Cummins and Gulf BMW’s David Johnson.

Outright lap record holder Harrison determined to take his total of TT wins into double figures, got the lead up to nigh on the six second mark at Glen Helen, whilst third placed Hickman was slowly reeling in fellow S1000RR BMW mounted racer Dunlop.

By Ballaugh Bridge Hickman had moved in front of Dunlop and was now only four seconds behind Harrison, whilst in total under 4 and a half seconds covered the top three, it was most definitely race on!

Astonishingly by Ramsey Hairpin Hickman got Harrison’s race lead down to under 2 and a half seconds. The lead was then reduced further to only 1.2 at the Bungalow.

17 times TT winner Dunlop now third, was only a further 1.963 behind the two racers to grace respectively this years TT programme and race guides.

Incredibly at Cronk My Mona, Hickman took the race lead and from here maintained the lead to the end of lap 2. 1.2 clear of Ulster GP lap record holder Harrison courtesy of a dazzling new Superstock TT lap record of 134.077 mph, the extremely likeable, personable racer was looking good to finally join the TT winners circle.

Dunlop aboard his own teams BMW maintained third and was only 2.7 behind Hickman as Gulf BMW’s Johnson and the evergreen Rutter finalised the top five. 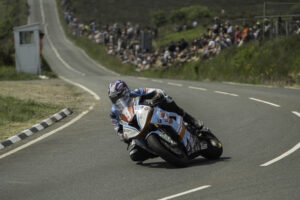 Following the scheduled pit stop, we had another new race leader, this time in the form of the joint third most successful competitor in TT history, Michael Dunlop.

Ballymoney’s Dunlop following a text book pit stop, moved into the race lead at Glen Helen by half a second over Harrison who had also overhauled previous lap leader Hickman on the timing screens. 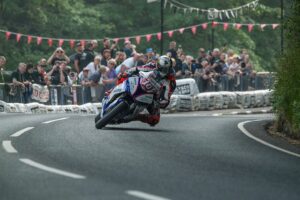 Soon though the calm, cool, multi talented Hickman was back into the groove, steadily chasing down Dunlop before retaking the lead at Ramsey Hairpin.

Yet another lead changed was to happen, this time at the Bungalow as Dunlop re took the lead before Hickman soon was back in front at Cronk Ny Mona and from here just about had the pace to maintain the lead, to the completion of lap three, holding an advantage of just over half a second.

Harrison in third 4.8 down on Dunlop also wasn’t out of contention for race honours, as we entered the fourth and final lap of one of the greatest TT races of the modern era.

Hickman’s lead at Glen Helen on lap 4 at plus 1.3 seconds, looked anything but comfortable and it was soon about to get even more close in the battle for Superstock honours.

By Ramsey Hairpin, the ever tenacious, never give up mentality of Michael Dunlop was beginning to bare fruit as he trimmed Hickman’s lead to 0.146, the stage was set for a truly memorable finish.

Over the mountain and Hickman known for having a great temperament, found another gear as he pulled two seconds clear at the Bungalow, which then grew to 4.6 seconds at Cronk Ny Mona.

From here he kept his cool to go onto seal a quite brilliant maiden TT victory by 4.4 seconds. 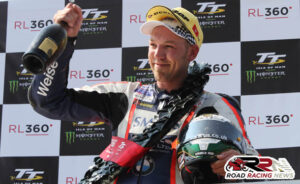 Race runner up Michael Dunlop was extremely gracious in defeat, showcasing the huge amount of respect he has for victor Hickman.

Dean Harrison in third place, although 13 plus seconds behind race winner Hickman, was delighted to wrap up a second successive rostrum finish. 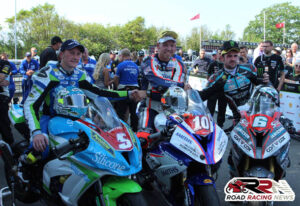 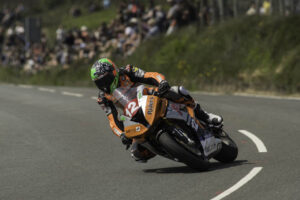 Outside of the first ten finishers, others to impress in a race which was unquestionably an all time TT classic included Brian McCormack (13th), Rob Hodson (17th), Mark Parrett (18th) and Penz 13 BMW’s Danny Webb (20th).