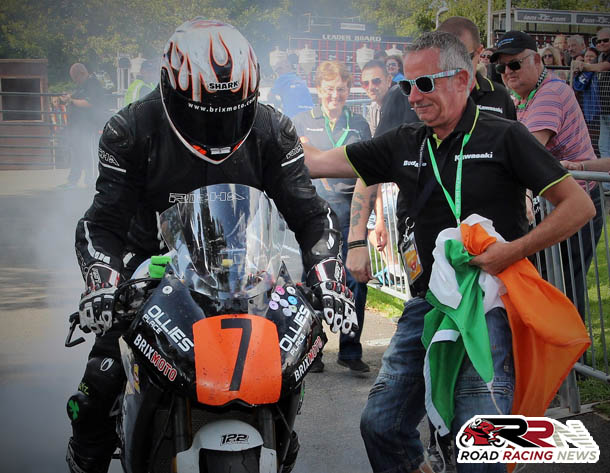 Runner up in last years Lightweight Manx Grand Prix, his answers to the popular series of questions are as follows:

“I think it has to be Skerries, being a local growing up five minutes from the track and being apart of the Loughshinny Motorcycle club, you can’t beat racing in front of your home crowd.”

“I love them all, I’ll race any bike I can throw my leg over, from a Honda 90 to a Superbike.”

“Apart from getting to thrash the nuts off your bike on a closed road at crazy speeds, you get to meet some great people and make great friends.” 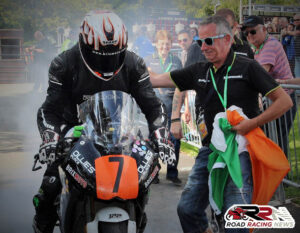 “TT, Mountain Course it’s a magical place, just no place comes close to it, massive respect to every rider to take this place on. My heart rate goes up just thinking about this place.”

“I respect everyone I race with, but my friend Dennis Booth is the man. He’s a top bloke I’ve great time for Dennis, he’s a man with a lot of race miles behind him, and is safe as houses to race with.”

“It must be the double podium at the 2014 Manx GP, I never expected to get them but twice in the one day was something special for me and the team.”

“It would be great if there was a world road race series, were we could travel all around the world racing the roads in different countries getting paid loads, but then it would be great if I was 4 inches taller and had a head full of long wavy hair!!”

“Sam McClements, I had the pleasure of meeting him as a child I was star struck, he took five minutes out of his day to talk to me, it’s a memory that I’ll never forget.”

“Superbike only cause they frighten last nights dinner out of me!”

“Pole position. Nothing like being at the front of the pack, knowing you were quickest out of them all.”