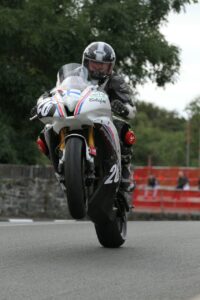 Tapio Mustonen is aiming for his personal best results on the mountain course at this years Manx Grand Prix. Tapio made his MGP debut back in 2012 securing 12th place finish in newcomers A race. The senior race of the same year saw him record a highly creditable 32nd place finish.

2013 junior Manx Grand Prix proved to be a productive one for Tapio who acquired 25th position following a fine all round performance. Practice week has being a fruitful one for the R6 Yamaha mounted rider having lapped at 112.736 mph during Wednesday nights practice session.

Junior Manx Grand Prix race for 2014 is coming up on Wednesday and for Tapio Mustonen it presents a great opportunity for him to acquire his best result to date on the most famous road race circuit in the world.