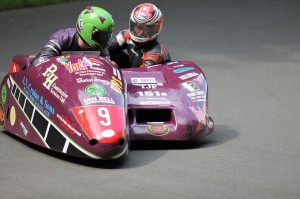 Carl Fenwick had a successful return to Oliver’s Mount at cock of the north road races. Carl competing on a Yamaha powered outfit recorded a fantastic third place finish in opening sidecar race of the weekend following a highly accomplished performance throughout.

Second sidecar race and following a frantic start into Mere Hairpin Carl went onto acquire top four finish. Third race of the weekend was next up, Carl and Dean Kilkenny went onto secure fifth place.

Fourth race of weekend saw the driver who been a top ten finisher at the Isle of Man TT record his second top three finish at 2014 cock of the north road races.