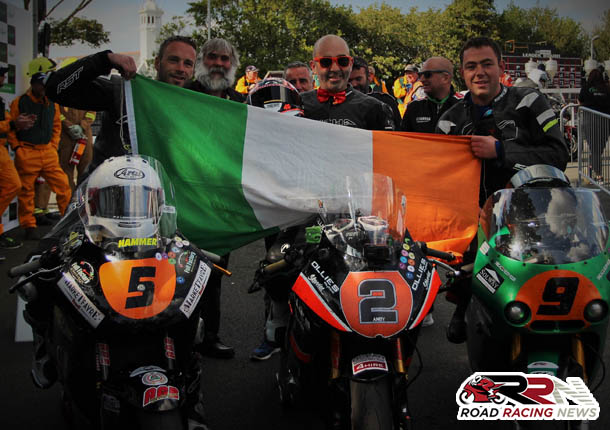 Embroiled throughout in a tight, gripping duel for honours with fellow countryman, prior Junior race winner James Chawke, the full story behind what unfolded in late August of 2018, is detailed in Road Racing News race report, which reads as follows:

The tight battle for class supremacy continued at Ballaugh Bridge and Ramsey Hairpin, which saw Chawke up the race lead to just over 2.4 seconds.

By the Bungalow though, his advantage was reduced significantly to under 0.6 of a second as Ollies Place/JFR Racing backed Farrell started to hit top form.

Encapsulating this point, Farrell moved into the race lead at the completion of lap 1, holding a plus three seconds advantage over Chawke, with TZ 250 Yamaha mounted Vines under two seconds further behind in third.

The battle royal out front continued on lap 2, with 2015 Newcomers B victor Vines more than matching the pace of Farrell and Chawke.

As seen in previous races though, drama a foot was soon on the horizon as fourth placed Victor Lopez Santos retired at Greeba Bridge, before 250 specialist Vines dropped out of contention at the 33rd Milestone.

This left Farrell and Chawke to battle it out for class honours, with Farrell starting to control the race at Cronk Ny Mona, moving almost five seconds clear.

Nearing class lap record pace lapping at 114.247 mph, the race runner up from 12 months ago held a nigh on eight second lead, upon entering the pits at the conclusion of lap two.

Second place finisher, Junior race victor Chawke 15.271 behind Farrell, in the winners enclosure couldn’t speak high enough about his S1-R Paton steed, plus issued a huge thanks to Mark Coverdale, Ian Lougher, Carl Roberts for helping to supply the machine.

“It’s been unbelievable, it’s a dream come true two podiums in one day, it’s unreal. I really enjoyed that race (Lightweight Race 1), lost a bit of time in the pits due to been nervous and things but look it is what it is, we’ve done our best.”

Martin Bullock Manxsport’s David Lumsden made it an all Irish podium, as ‘The Hammer’ secured a third Manx GP podium finish, finishing over 50 seconds clear of fellow countryman Dave Butler.

If your keen to increase your Manx GP knowledge, why not check out Road Racing News Facts book.

It’s filled to the brim with distinct, unique facts and has received countless good reviews.

I can’t recommend it enough, then again I am biased!

Pure Road Racing In East Yorkshire With A Rallying Twist