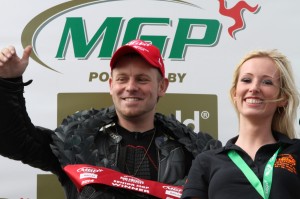 Rob Hodson completed podium finishers on JGH racing R6 Yamaha, the race was closely fought throughout with Soar, Moulai and Hodson all in contention for victory. Malachi Mitchell Thomas was an excellent fourth on Silicone engineering ZX6 Kawasaki, Malachi who has made a hugely impressive Manx Grand Prix debut recorded personal best lap speed of 116.652 mph.

Kamil Holan recorded fifth position after a highly accomplished performance from the 2012 newcomers A Manx Grand Prix winner. Rounding out the top six was Andy Farrell who has had a memorable 2014 Manx Grand Prix which has included third and second place finishes in junior and super twin races.

In all its being a top Manx Grand Prix with fantastic racing overall which has produced different winners on the mountain course across all classes with Billy Redmayne, Dean Osborne, James Caswell Cox, Andy Lawson, James Neesom, Mick Jordan and Andrew Soar all tasting victory on the most famous road race circuit in the world.