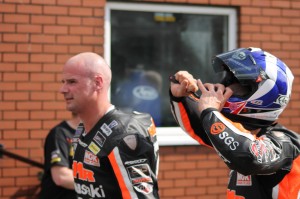 Ryan Farquhar had a successful return to the Isle of Man TT. Competing on his teams KMR Kawasaki super twin the three time TT winner was back competing on the mountain course for the first time since 2012.

Practice week went well for Ryan finishing second quickest overall in lightweight TT practice lapping at 116.8 mph to prove that despite having not competed on the worlds greatest road racing circuit for a year that the speed, ambition and talent was all still there to battle for his fourth TT victory.

Onto the lightweight TT race and with start number three Ryan was well placed to secure a top result, in a consistent performance Ryan went onto record seventh place finish.

Next road race coming up for Ryan is the Barry Sheene road race festival at Oliver’s Mount where he is competing in the classic races on 500 Paton and Harris Yamaha. Plus more classic racing action is in prospect for him with the classic TT races coming up where Ryan will bid for more glory on the mountain course.