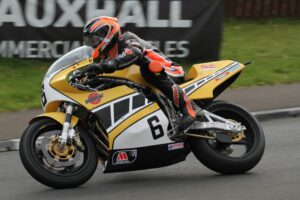 Formula 1 practice has seen the three time TT winner lap in the 117.7 mph bracket on Harris Yamaha. Having made his return to competition in road racing this year Ryan has had a consistent year of racing which has included 7th place finish in lightweight TT.

Highly creditable results where also obtained at North West 200, in all its been a productive first season back racing for the seven times Duke road race rankings champion and 500 classic TT or formula 1 classic TT success would be the icing on the cake for him.