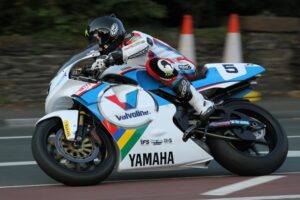 James Cowton was second quickest lapping at 109.893 mph on Peter Berwick TZ250 Yamaha as Nigel Moore, Stuart Garton, Ewan Hamilton and Chris Barratt rounded out top six. Bruce Anstey competing on YZR 500 Yamaha at 2014 classic TT races was always going to be something to greatly look forward and the 2014 Ulster Grand Prix feature superbike race winner has brought him excellent form over from Dundrod to the mountain course where more success could be on the cards for the supremely talented rider.