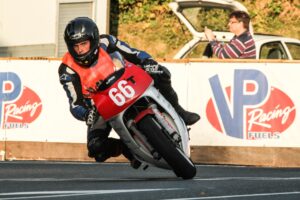 Lancelot Unissart is one to watch in 2014 newcomers Manx Grand Prix race. Lancelot competing on a VFR 400 Honda lead the way in newcomers C practice tonight following lap speed of 97.651 mph good going for only third night of practice.

The 2014 Southern 100 saw him make his debut at the hugely popular Billown based road race and following an impressive performance throughout secured 6th place finish in opening 125/400 race. Second 125/400 race would see Lancelot secure another top six finish.

Newcomers Manx Grand Prix races are always competitive and there’s no doubt that this talented up and coming rider will face stiff opposition for newcomers C Manx Grand Prix victory but at this moment in time he must start one of the favourites for race victory.