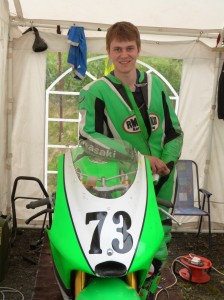 Nick Anderson is adapting well to the mountain course. Nick making his Manx Grand Prix debut on RMDK Kawasaki in newcomers B race has already in practice chalked up lap speed of 102.420 mph during Wednesday nights practice session.

This year has seen the up and coming road racer secure top five finishes at Oliver’s Mount during the Barry Sheene road race festival. Nick’s experience of competing around the mount which is known to many as a mini TT has stood him in good stead for his debut competing at the most famous road race circuit in the world.