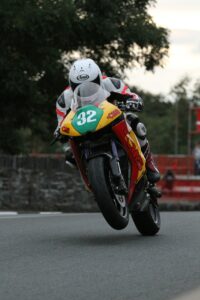 Since then the 2013 newcomers C Manx Grand Prix winner has rapidly got quicker as the week has gone on. Tuesday night since lap speed of over 105.529 mph chalked up and on Wednesday evening Ben lapped at 107.839 mph unofficially his quickest lap speed around the mountain course.

Plus in formula 2 practice the TZ250 Yamaha mounted rider is currently 8th quickest overall following first four timed practice sessions with lap speed of 103.827 mph. Ben has already experienced being on the podium at Manx Grand Prix following newcomers C victory back in 2013 and theres no doubt the rider who has bright future ahead in road racing could be tasting more champagne on the podium in particular in super twin race.