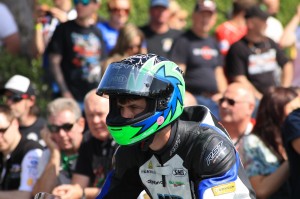 2014 has seen the rider who enjoys competing on the mountain course make his Isle of Man TT debut having competed at the Manx Grand Prix for six years. Amongst the highlights during TT 2014 for him included 14th place finish in lightweight TT following a consistent and meticulous performance.

The senior TT provided Michael with a highly creditable 18th place finish after an excellent performance on Martin Jones racing backed ZX10 Kawasaki. Also during 2014 the highly rated rider was runner up in both open and grand final races at Kells road races back on the road racing calendar for first time since 2011.

Michael Sweeney looks set to be one of the leading newcomers for this years Macau Grand Prix where he is set to be team mates with Dan Kneen 2014 Irish road race superbike champion in the Cookstown Burrows engineering racing team.