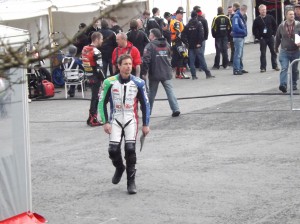 Mark Miller is planning to compete at the Isle of Man TT in 2014. Mark made his Isle of Man TT debut back in 2006 and has since gone onto become the fastest rider from America to have competed at the Isle of Man TT. Mark this year competing for the Splitlath Redmond motorsport team achieved a 28th place finish in the superbike race whilst in the senior Mark finished in 37th position.

In 2009 Mark in the superbike TT race claimed his best ever TT result with a 11th place finish when competing on a GSX-R 1000 Suzuki for the WA Corless joinery/Jackson racing team. At this years Macau Grand Prix Mark competing on a Buell finished in a highly creditable 11th place, Mark in 2000 finished on the podium at Macau. Mark Miller is one of the best riders from America to have competed at the Isle of Man TT, 2014 looks like being a top year for the 2010 TT zero winner.