Malachi proved at Southern 100 that he is a natural at road racing which has being further proved during practice week at this years Manx Grand Prix. Shane Egan’s good debut on the mountain course continues being third fastest tonight acquiring his fastest lap speed to date of 113.214 mph.

Matthew Rees, Sam West who recorded his first lap speed of over 111 mph and Rob Livesey rounded out the top six. Dean Osborne was once again on top in newcomers B practice securing lap speed of 105.928 mph as Barry Furber showed excellent pace lapping at 104.958 mph.

Leon Murphy is enjoying his debut at the Manx Grand Prix and the seasoned road racer went fourth quickest tonight lapping at 94.689 mph whilst Andrew Cowie and Sam Johnson finalised the top six. 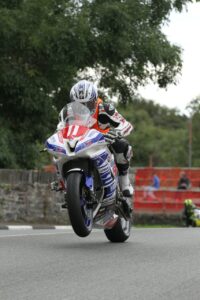