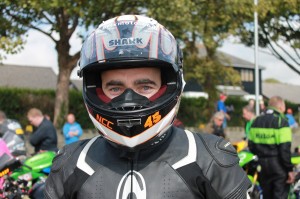 Andy Farrell enjoyed double podium finish on Wednesday at Manx Grand Prix. The talented rider began the day with a highly accomplished performance in junior Manx Grand Prix where following a quick start he slotted into a battle for top three position.

By lap three Andy competing on full factory winners wear backed ZX6 Kawasaki had gone into third position and from here third place was maintained to the finish line. It was Andy’s second podium finish around the mountain course and one that the was visibly delighted about. 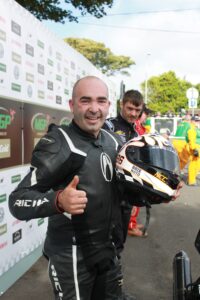 Super twins Manx Grand Prix was next on the horizon and the rider from Skerries starting at number eight like in junior MGP quickly was close to the front moving into third place on lap 1.

On lap three Andy was still third but on final lap had moved up to second position still in with a chance of super twins Manx Grand Prix victory. In the end second place finish was secured to make it two podium finishes in a day without one of the biggest achievements so far in Andy’s road racing career.