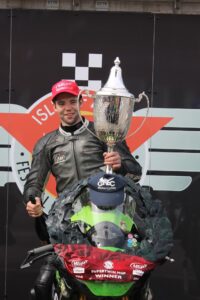 In a superb performance throughout James competing on his own teams ER6 Kawasaki backed by centurion windows lead at Glen Helen on lap 1 and from then on was always challenging for race lead.

Then on final lap of the race the rider who made his debut on the mountain course in 2013 opened up a significant advantage which he carried to the line to secure his first Manx Grand Prix win.

James has in 2014 already proved that he is improving all the time in road racing following impressive performances at Oliver’s Mount in particular at Barry Sheene road race festival with multiple third place finishes. 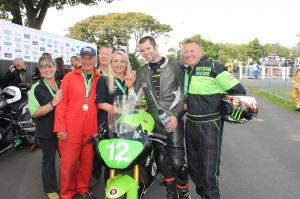 Now the rising road racing star has won on the most famous road racing circuit in the world he is aiming to set his sights in 2015 on a debut at the Isle of Man TT and to also compete for first time at North West 200 and Ulster Grand Prix.

James lapped at over 111.4 mph on opening lap of super twins Manx Grand Prix and said of the ER6 Kawasaki that he was competing on that it ran superbly. In all its being a hugely memorable day in the road racing career for James Neesom who has a bright future ahead of him on the mountain course.