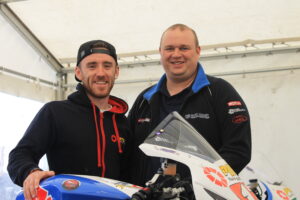 Lee Johnston has proved to be a natural around Oliver’s Mount since making his debut at the iconic road race circuit at 2013 Scarborough gold cup.

Second superbike race and following a consistent performance Lee finished in fourth place. The 2013 TT privateers champion is set to be in action at the upcoming cock of the north road races.

Where he will start as one of the favourites for victories in supersport and superbike races when competing on East Coast racing Honda’s.