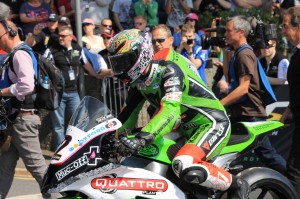 James Hillier recorded a series of top results at this years Isle of Man TT. The rider nicknamed dynamite competing for Quattro Plant Muc off Kawasaki began TT 2014 with a fantastic start in Dainese superbike TT race leading at Glen Helen and then battling for a top three position at the end of lap 1.

But then slight issues struck the Quattro Plant Muc off ZX10 Kawasaki which meant James was hampered for the rest of the race, despite this he finished in a creditable 9th place. Opening Monster energy supersport race would see the 2013 lightweight TT winner record a solid seventh place finish.

Next up was Royal London 360 superstock TT race, in a thoroughly consistent display James went onto achieve 10th place. Second Monster energy supersport race would see the best performance so far of TT 2014 for him with a superb fifth place finish.

But arguably the biggest race of TT 2014 for James was the Bike nation lightweight TT. The Quattro Plant Muc off Kawasaki rider rode a top race to consistently be battling for race lead, although this year didn’t bring lightweight TT victory James was pleased with second place finish. 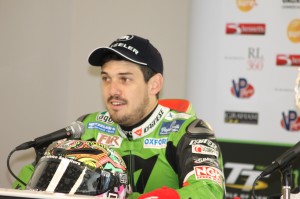 This is his third podium finish at the worlds greatest road race. So next up was Pokerstars senior TT, James rode a calm and professional race as he battled with Bruce Anstey Isle of Man TT lap record holder for fourth place. In the end fifth place finish was acquired, its being a thoroughly consistent TT for James Hillier who continues to prove why he is regarded as a rider who can become a multiple time TT winner.