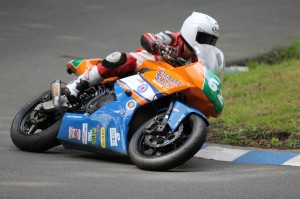 James Cowton showed his star quality during second day of racing at cock of the north road races. The rider who made his Oliver’s Mount debut back in 2012 is now considered by many to be a Oliver’s Mount specialist and his status as this continued during cock of the north on Sunday with second place finishes in second supersport race and fourth super twins race of the weekend.

Second supersport race saw James lead into Mere Hairpin before dropping back to second place, despite this James kept up a good pace throughout producing highly creditable lap times on Cowton racing CBR 600 Honda. Fourth super twins race of the weekend and once again James got the hole shot before maintaining second place throughout following a gritty performance on Stewart Smith racing ER6 Kawasaki.

The talented rider is set to soon make his Armoy road races debut and following on from his excellent form at Southern 100 and cock of the north road races James could well surprise many people next weekend at Armoy.