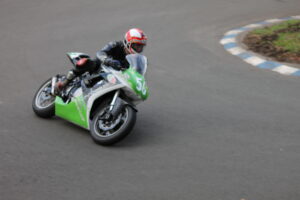 Jack Hunter produced excellent performances during the Ian Watson spring cup road races. Jack who made his Oliver’s Mount debut at the cock of the north road races last year was competing on a ER6 Kawasaki and in the opening super twin race finished a creditable 11th.

Super twin race two saw the rider who is making his Manx Grand Prix debut this year finish in a highly respectable 10th place. The non qualifiers race saw Jack produce a top ride to finish in second place only 0.08 of a second behind race winner Matthew Rees.