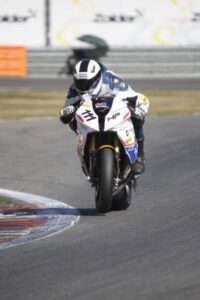 International road racing championship star Vick De Cooremeter is making his Isle of Man TT debut this year. Vick is set to compete in the superbike, superstock and senior races on a SR1000 BMW for the Okidoki racing.be team. Vick in the 2013 international road racing championship finished third place, highlights of the season for Vick included podium finishes at Chimay and Frohburg.

Vick’s main ambition for his Isle of Man TT debut is to enjoy the event. Overall looking to the future Vick is aiming to compete at the Isle of Man TT for many years to come, having starred in IRRC Vick has all the elements to become a top TT rider.