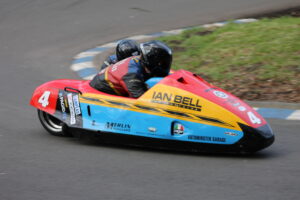 Ian Bell was victorious in both sidecar races at this years Ian Watson spring cup road races. Ian and his son Carl Bell produced two fine rides to win the sidecar races at the spring cup around Oliver’s Mount which always provide close and exciting racing. Two time TT winner Ian is returning to the mountain course this year and has start number 7 for both sidecar TT races.

Whilst Carl Bell is making his TT debut as a sidecar passenger, Carl is greatly looking forward to competing for the first time at the Isle of Man TT.