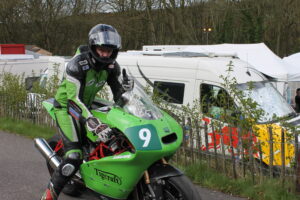 Ivan Lintin had a brilliant day of racing at the Ian Watson spring cup road races. Super twin lap record holder around Oliver’s Mount Ivan was victorious in both super twin races competing on the Tigcraft Kawasaki. In the feature Ian Watson spring cup race Ivan produced arguably the performance of the race by finishing in second place on the Taylor Lindsey racing CBR 1000 Honda Fireblade.

In the opening superbike race the rider nicknamed lightning Lintin finished in fourth place not to far off a top three finish and the supersport race saw him finish again in 4th place showing good race pace throughout on Taylor Lindsey racing CBR 600 Honda. In all a top racing’s for Ivan who’s 2014 road racing season has got off to a great start. Next road race coming up for Ivan is the North West 200 where in 2013 he finished a good 4th in the super twins race.