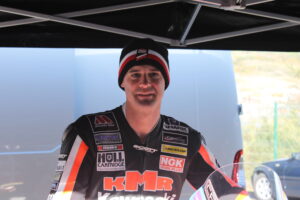 Ryan Farquhar had a brilliant return to action at Oliver’s Mount at this years Ian Watson spring cup road races. Ryan competing on his teams ER6 Kawasaki super twin backed by SGS international finished in second place in the opening super twin race having lead for a good majority of the race. At Mere Hairpin on lap 1 of the opening super twins race Ryan lead at the front it was as if he never being away from action in road racing.

Super twin race two saw him again second but this time closer to super twin winner Ivan Lintin. Ryan’s return to competitive action at Oliver’s Mount has being a big talking point at this years Ian Watson spring cup road races and the road racing legend produced a fine display. Despite having not competed at a road race since 2012 the three time TT winner has lost not of his natural ability, riding craft and smooth riding style, next road race up for Ryan on his return to action is the Tandragee 100.