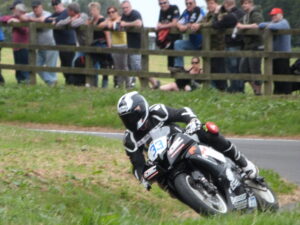 Gary Graves is ready for the 2014 road racing season. Gary who achieved a top 10 finish in this years Steve Henshaw international gold cup race at Oliver’s Mount is starting his season at the mount in the Ian Watson spring cup road races.

After the spring cup Gary is competing at the Cookstown 100 where this year made saw Gary achieve creditable results after this Gary is aiming to return to the Isle of Man TT.

Gary made his TT debut in 2012 achieving a solid result in the opening supersport race, potentially Gary could be competing in the lightweight TT race.

Plus next year could see Gary making his debut at the Ulster grand prix. Gary Graves is a seasoned road racer who has rode superbly in 2012 and in 2013, 2014 looks like being a good year for Gary.

Dominic Herbertson – Star Of The Future