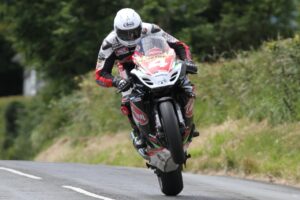 Senior race would see the talented rider get a stunning start to lead by 0.34 of a second at end of opening lap. Despite dropping back to second place Dan held onto secure runner up spot edging out none other than Michael Dunlop.

Opening supersport 600 produced a close battle out front as Dan battled his way to third place finish. Second 600 race saw a similar pattern to it with the rider lapped for first time at over 129 mph at this years Isle of Man TT record once again third place.

Feature race of the week Southern 100 solo championship began in good style for Dan going into race lead on lap 1 before dropping back through the pack. In a meticulous and gritty display Dan fought his way through to third place, his fourth podium finish at 2014 Southern 100.