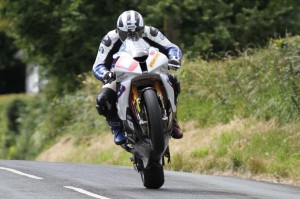 It was a challenging Southern 100 for Michael Dunlop. Competing on BMW Hawk racing superbike which has brought him this year superbike and senior TT success,practice went well for the 11 time TT winner lapping in the 112 mph bracket.

600/1000 race and following a closely contested start Michael was in fifth place at cross four ways on lap 1, as race went on he steadily built up his pace to finish in third place only 0.4 of a second behind second place finisher Guy Martin.

Senior race would prove to be a challenging one for Michael as he battled his way through to third place, on final lap of the race the two time Southern 100 solo championship winner pushed Dan Kneen close for second position in the end finishing only 0.02 of a second behind.

A challenging week at Billown ended with reliability issues in both second supersport and solo championship races, Michael is set to be in action at Armoy road races where he will be looking to achieve his fourth race of legends victory.