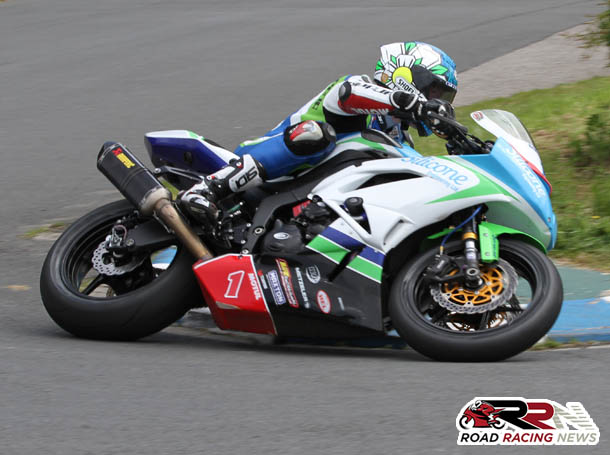 There has been top class action a plenty at Oliver’s Mount today, on day one of the 2016 Cock Of The North Road Races.

Piloting the same Silicone Engineering Racing ZX6R Kawasaki, which he enjoyed great success with at TT 2016, he dominated throughout to finish ten seconds in front of nearest challenger Daley Mathison.

James Cowton, Cowton Racing by Radcliffe’s CBR 600 Honda finished an excellent third, James result made all the more notable given he is going through the pain barrier this weekend, following his well noted incident in the Royal London 360 Quantum Superstock TT.

Ten times TT winner Ian Lougher was victorious in the ultra lightweight category, TT 2016 saw Ian in action on the great sounding MMX 500 Suter, which he propelled to 34th place finish in the Pokerstars senior TT.

Arguably the race of the day was in the opening sidecar race as Dave Wallis/Harry Payne emerged victorious by just 0.021 of a second, over Steve Ramsden/Matty Ramsden.

Victorious by almost seven seconds in the six lap race, Dean is now nearing the mark of 40 Oliver’s Mount victories, another unique accomplishment for the runner up in the TT 2016 Joey Dunlop championship.

Second place finisher Ivan Lintin, carried on his 650 supremacy in the opening super twins race, winning by over 29 seconds on the Devitt RC Express Racing ER6 Kawasaki, which he recently propelled to a momentous lightweight TT victory.

Tomorrow at Oliver’s Mount, sees a further scheduled 12 races including the prestigious Cock Of The North race, won over the last three years by Dean Harrison.