Christian enjoys competing around the mount and is planning on competing on a ZX6 Kawasaki in 2015 at the iconic road race circuit. 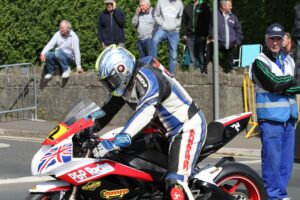 2014 has also seen him make his Manx Grand Prix debut. Competing on CS racing ZX6 Kawasaki highly respectable 35th position was recorded in newcomers A race as he got his mountain course career off to a solid and consistent start.

A second year of competition at the Manx GP is on the cards for Christian in 2015 who has the potential to long term become a front runner at one of the most famous road races in the world. In all the 2015 road racing season is set to be an exciting one for the rider who loves competing in pure road racing.