Anthony Redmond is set for an exciting 2015 road racing season. Anthony at this year’s Manx Grand Prix had the honour of setting off at number 1 in junior and senior races. 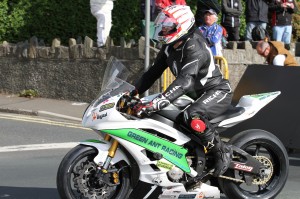 Competing on Green Ant racing R6 Yamaha solid 15th place finish was recorded in junior race. Brilliant seventh position was achieved in lightweight race following a tenacious and battling performance on c&c ltd backed 400 Yamaha. This is his joint personal best finish around the mountain course having finished seventh in same race in 2013. 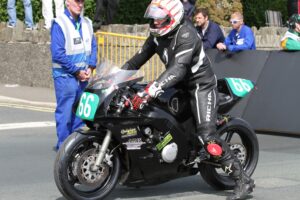 The 2014 senior Manx Grand Prix proved to be a highly consistent one for Anthony who finished highly creditable 11th.

Looking to 2015 the talented rider who made his debut on the most famous road race circuit in the world in 2008 is planning on competing for the first time at the Isle of Man TT where he is aiming to compete in supersport races on a 675 Daytona Triumph for Steve Jackson racing. 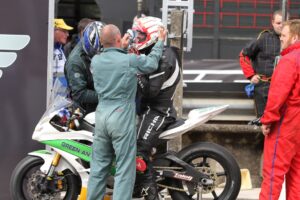 Whilst for the lightweight TT he is set to be competing on his uncle Alan Young’s ER6 Kawasaki, whilst if his entry for TT 2015 is accepted a ride on 1000 stocker run by Green Ant racing could well be on the cards.

Competing in the Manx Grand Prix next year is still a possibility as is competing at North West 200 and Ulster Grand Prix whilst pre TT classic, Southern 100 and classic TT races are all part of Anthony’s enterprising race schedule for 2015.