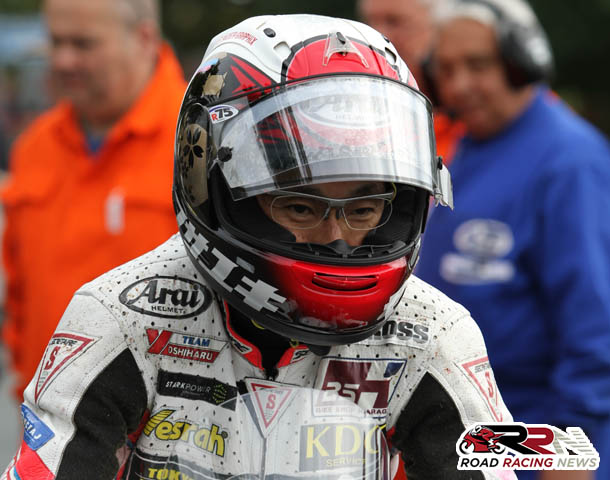 In the run-up to TT 2018, I put together the following article which gives a greater insight into the Manx GP podium finisher’s racing career.

It was back in 2015, when he first tackled the fabled Mountain Course, competing in the Newcomers C and Lightweight races, at the Manx Grand Prix.

Finishing runner up in the Newcomers C race, he created history by becoming the first rider from Japan, to secure a Manx GP rostrum finish.

Since then he’s established himself as no doubt at this moment in time, one of his nations leading pure roads exponents.

His first TT stint last year, saw him chalk up a very respectable 49th place finish within the opening Monster Energy Supersport encounter, along the way lapping at just over the 115 mph mark. 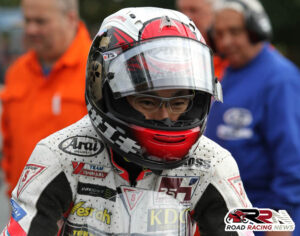 Set to pilot again at TT 2018, his trusty 600 Honda, the genial racer candidly stated recently, what competing on the Mountain Course, means to him.

In early summer, at the start of the race-season, bike-fans from all over the world visit to spectate. Proudly riding their bikes, they crowd onto ferries, then into the campsites and guest houses of which there are many on the island. There is the sound of engines from every direction, and there is a festive atmosphere on the whole of the Island.

Honda, Yamaha, Suzuki, Kawasaki, some of the the most popular machines are made in Japan. At the same time that Japanese bikes are admired worldwide, I find the near absence of Japanese competitors and spectators quite mysterious.”

“The truth is that in my 30’s, I had only one chance to take part in a race at the Isle of Man. My preparations were complete, but because of an unfortunate political situation that arose just before my departure it was not possible to make the voyage and I had no option but to abandon my race entry.

My enthusiasm for the Isle of Man was not extinguished but because of the demands of everyday life another opportunity failed to arise and I began to give up on the idea.

My appetite to take part in the race grew. Having endured flight delays and a rental-car accident, I finally arrived at my destination, and waited in front of the organisers office, not sparing time to watch the race for which I had so much enthusiasm.

I waited for four days without giving up, only coming face-to-face with the organisers just before I had to return to Japan, thanks to the help of some people I had met. Having submitted my Japanese race results, I had taken the first step to participation.”

“Having overcome many obstacles, in my first Manx GP in 2015 I placed second, in the Newcomers C race and was the first Japanese racer to mount the podium in 40 years. Thanks to my team mates efforts and my supporters financial assistance, this year will be the fourth time I will be realising my dream of competing on the Mountain Course.

Every time I return to Japan after the race is over, I immediately begin preparations for the following year. At present Team Yamanaka consists of four people.

In the 1960’s Soichiro Honda risked his company on a life-or-death challenge to the Isle of Man with a minimal team.

Somehow, Team Honda managed the outstanding feat of dominating the higher echelons of the races. But although I have the utmost respect for him, it is my own sense of values that will spur me to race to the best of my ability.

In order to say thank you with the utmost sincerity, it is my ambition to make sure that I am Japanʼs fastest rider and secure a top ten finish on the TT course.

To make that a reality and to meet the Isle of Manʼs challenge to the best of my ability, is the theme of the second part of this bike nut’s life.”