Alastair Seeley will be bidding to add to his tally of 15 victories at the North West 200 in 2015. Alastair secured his first win around the triangle in 2008 competing on JMF Millsport R1 Yamaha in a closely fought superstock race edging out Bruce Anstey and Cameron Donald.

His second North West 200 victory was recorded a year later once again in superstock class, 2010 at the iconic road race would prove to be a momentous one for Alastair as he achieved opening supersport and feature superbike race wins.

His fifth win around the triangle was secured in opening supersport race in 2011 after a great battle with Cameron Donald. 2012 would see him increase his tally of North West 200 wins to eight following opening superstock, second supersport and feature superbike race victories. 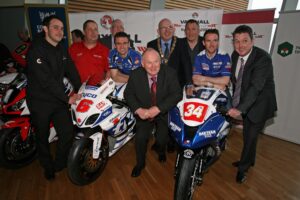 This year has seen the wee wizard become a 12 time winner around the triangle following pulsating ride on Mar Train racing R6 Yamaha in supersport race 1. This was followed by gritty and determined performance on the teams ZX10 Kawasaki as he won a great superstock race having battled throughout with Michael Rutter and Michael Dunlop.

Now up to 12 North West 200 wins Alastair is aiming to get closer to the 15 wins bracket which only one rider has achieved the one and only Robert Dunlop the most successful rider in history at the North West 200.