Unfortunately due to a range of issues created by the ongoing Covid-19 pandemic, Manx Grand Prix/Classic TT action for 2021 is officially cancelled.

Whilst this is clearly further negative news for teams, racers, road racing fans, we’ve got to keep positive, spellbinding, mesmerising, thrilling action on the fabled, mythical Mountain Course will hopefully return in the near future.

“Obviously this is yet another disappointing announcement for us to have to make but as with the cancellation of the 2021 TT Races, it was important that an early decision was made to give clarity and certainty to the thousands of visitors and individuals that come together for the Classic TT.

A two-year break from racing on the Island is not what anyone would have wanted, but our Motorsport Team have been hard at work to ensure that the TT and Classic TT return stronger than ever in 2022 and we look forward to sharing some of these developments in the coming weeks and months.”

“It is undoubtedly a huge disappointment for everyone associated with the races and we really feel for all the race fans and competitors but the Department clearly had no real option but to cancel again this year after it had reviewed the situation and the club supports that decision.

The operational and logistical challenges caused by the pandemic haven’t gone away yet and we have to be realistic as to whether we could confidently guarantee the availability of key personnel and officials needed to deliver the races.

The event requires a huge commitment from marshals and medical representatives, many of whom are volunteers and it is a commitment that it may not have been possible for many of them to make this year.” 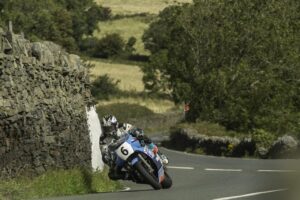 With the Manx, Classic forced off the roads calendar for a second successive year, it also means that for the second year running the Isle of Man won’t host any road races.

As aforementioned this isn’t positive for teams, racers, road racing fans. I think we shouldn’t forget though the impact this has on businesses across the Isle of Man from hoteliers to shop owners to book shop owners to various food and drink outlets who have lost out on large incomes due to the events been null and void.

New Challenges On The Horizon For CF Moto