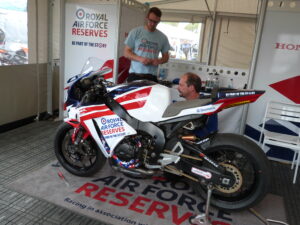 2009 senior Manx Grand Prix winner Michael Russell is back competing at the Isle of Man TT this year. Michael is competing for RAF Reserves Honda on a CBR 1000 Honda Fireblade in the superbike, superstock and senior TT races. 2013 at the Manx Grand Prix saw Michael record his second win on the mountain course which was a close run victory in the super twins race when competing on a ER6 Kawasaki backed by Track electronics.

Michael has already lapped at over 120 mph at the Isle of Man TT and will be aiming to achieve a personal best lap time when competing in the big bike races this year.