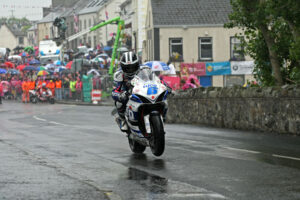 Second place in following supersport race was achieved after another excellent all round performance. Open race would prove to be a productive one for William with third position recorded.

Race of legends in opening laps was hotly contested with William battling for race lead with Michael Dunlop, Guy Martin and Dan Kneen. In the end the hugely talented rider acquired fourth place finish to round off 2014 Armoy road races in consistent fashion.