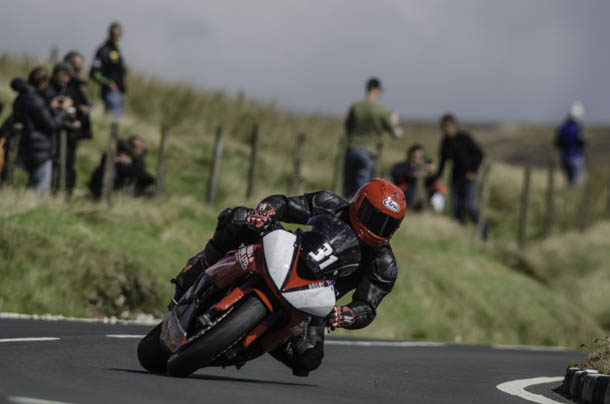 Next rider to take on Road Racing News ten questions challenge, is a racer who’s more than worthy of being regarded as a rising Manx roads star, 2014 Newcomers B Manx Grand Prix winner Dean Osborne.

Third in last years Senior Manx GP, Dean’s answers to the popular series of questions, are as follows:

“My favourite National Roads Meeting would have to be the Manx Grand Prix. It’s on my front door and I love the whole event. It has a great atmosphere!”

“This is a hard one, my favourite would have to be the Honda Drixton 350 which I rode during the Classic Festival at Donington Park, it was my first time on a bike like it and I won the 350 class.”

“The best part is all of it. We get to race as fast as we can between hedges and stone walls. The adrenaline you get is fantastic, nothing will ever beat it.”

“The TT would have to be my favourite. I enjoy spectating out on the hedges watching the top road racers showing us all how it’s done.” 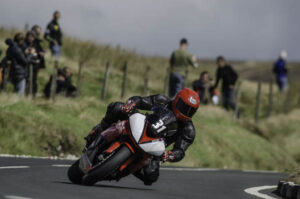 “I’d say my most respected rival has to be my good friend Callum Collister, as we’ve had many great races together through the years and he helped me when I first started on the roads.”

“My best moment has to be when I won the Newcomers B race at the Manx Grand Prix in 2014. It was a great feeling and a memory that I’ll never forget.”

“Yes, I’d like to see the Jurby Road Race return as it was a great course and an event I always wanted to do. I just missed out on the chance before they stopped running the event.”

“My hero is Joey Dunlop, he was the best! He was smooth and fast, purely a great legend of the sport!”

“Supersport as I’ve not ridden a Superbike, maybe one day I’ll get the chance to ride a big bike.”

“It would have to be the fastest lap!”