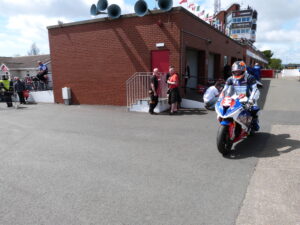 Stephen Thompson is teaming up with Michael Rutter as part of the Bathams BMW team for TT 2014. For this years Isle of Man TT both Stephen and Michael are competing on S1000RR BMW’s in superbike and senior TT races. BMW has a strong presence in all classes at this years TT races and Bathams BMW’s entry adds even more quality to the manufacturers already top line up.

The team will also be competing at the North West 200 where Michael Rutter will be looking for wins to add to his already remarkable tally of 12 North West 200 wins. But the highlight of the season for the team is set to be TT 2014 and Stephen Thompson is greatly looking forward to the superbike, superstock and senior TT races, having lapped at over 125 mph at TT 2013 the rider known as Kong to many has every chance of a personal best lap time this year.

Michael Rutter’s a four time TT winner and despite having not competed on BMW’s at the Isle of Man TT you can expect “Blade” to be right in the mix in particular in superbike and senior races. Bathams BMW have one of the strongest teams for TT 2014 plus a pattern is emerging for this years Isle of Man TT which is BMW have their most competitive entry in years at the worlds greatest road race.

Top Line Up For This Years Supersport TT Races