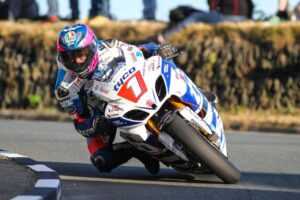 In decent conditions all round Dan Kneen was early race leader of this years Southern 100 solo championship at Cross four ways on lap 1, as opening lap went on though, Dean Harrison had taken the race lead by 0.28 of a second over Dan Kneen, Guy Martin was nothing behind in third place and Michael Dunlop was in close pursuit holding fourth place on BMW Hawk racing superbike.

Onto lap 2 and Harrison going for six wins in a week opened up a slight advantage over Kneen and Martin but then Kneen dropped back down the pack as Martin was now into second place with Michael Dunlop not to far away now into third position.

By end of lap 2 Harrison lead by 0.7 of a second over Martin with Dunlop 0.3 back on Martin in third place. James Cowton held fourth place and was continuing to prove why he is one of the fastest rising stars in road racing. 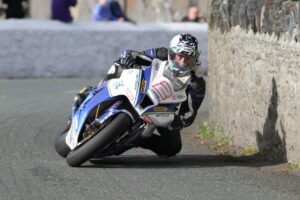 Laps 4 and 5 would see Harrison continue to lead but Martin was fast reeling him in on Tyco Suzuki by TAS superbike and the gap out front was down to 0.3 of a second.

On sixth lap Dean Harrison and Guy Martin where closer together than they had been in the whole race, as both riders crossed the line Martin had edged in front of Harrison to take the race lead.

Next lap and following going into race lead for first time Guy Martin stayed in front of Dean Harrison only for the RC Express racing Kawasaki rider to re pass him.

But then Martin re took the lead and from here despite the best efforts of Harrison the ever popular road racer went onto secure his third Southern 100 solo championship victory.

Dean Harrison was runner up in solo championship following another top performance, at this years Southern 100 Dean has won five races and been second and the other races which he competed in.

Dan Kneen produced a determined and gutsy performance to secure final place on the podium, Dan has at 2014 Southern 100 recorded four podium finishes carrying on his great form this season where currently he leads the superbike Irish road race championship.

Another closely contested solo championship race around Billown which brought fans favourite Guy Martin a well earned race win but theres no doubt that the star of this years friendly races has being Dean Harrison with five wins, two second place finishes and a new outright lap record.