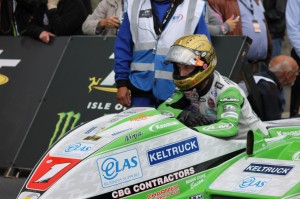 Dave Molyneux is back in action at Southern 100 for the first time in ten years. 17 times TT winner Dave is competing at Billown this year on Elas DMR Kawasaki outfit with fellow TT winner Patrick Farrance alongside as passenger.

Ian Bell had a hugely successful return to the Isle of Man TT recently with 4th place finish in opening sidecar race. Ian’s son Carl Bell made his TT debut this year and thoroughly enjoyed the experience of competing on the mountain course. 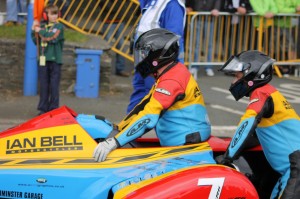 Following third place finish in sidecar solo championship race in 2013 Ian and Carl have the potential to be battling for feature sidecar race victory at 2014 Southern 100.

Conrad Harrison at TT 2014 recorded his first victory on Printing roller services backed outfit. Conrad is all set for Southern 100 where he is joined in outfit by Jason Crowe nephew of sidecar TT hero Nick Crowe. 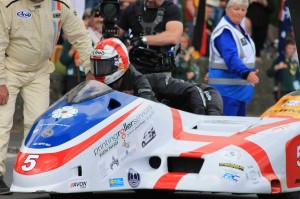 Gary Bryan and Jamie Winn have in recent years secured many consistent results at Isle of Man TT and Southern 100. They could spring a surprise or two at Billown this year. 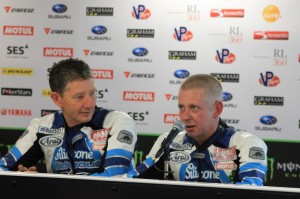 John Holden and Andrew Winkle came close to securing more TT wins recently, they will start as one of the favorites for victories at the friendly races where TT winners, TT podium finishers and rising stars are all taking part.

Greg Lambert, Karl Bennett and the evergreen Roy Hanks add further quality to arguably in recent years one of the best entries for sidecar races at the Southern 100.