Shane Egan is all set to compete at the 2015 Manx Grand Prix. The 2013 Irish road race senior support champion enjoyed a highly successful debut on the mountain course in 2014 which included a highly accomplished performance in newcomers A race.

Where third place finish was achieved as Shane got his 2014 Manx GP off to a great start. Senior race saw another top quality result with eighth position recorded as he rounded off his first two weeks racing on the most famous road racing circuit in the world in solid fashion. 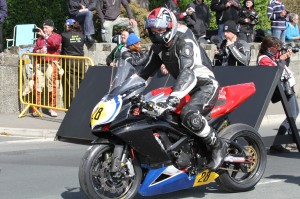 For action on the mountain course in 2015 Shane is competing on a GSX-R 750 Suzuki in senior race plus is planning on competing on a super twin as he bids for more great results at the Manx Grand Prix.

Entry into the classic TT races is on the cards as well as Shane is planning on riding a GSX-R 750 slingshot Suzuki backed by Askeaton Paving.com in formula 1 race. A hugely talented rider all the components are there for Shane Egan to enjoy a top year of competition on the road race circuit which produces heroes, history makers and legends.