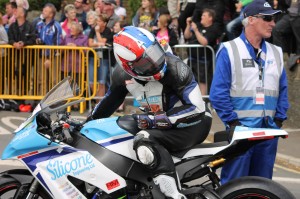 Feature superbike race would prove also to be productive with top 10 finish achieved. Silicone engineering racing rider Russ has enjoyed so far a superb season which has included being runner up in TT 2014 privateers championship.

One of the most improved road racers in 2014 is now looking forward to competing in the classic TT races where he is Suzuki mounted for formula 1 classic TT.