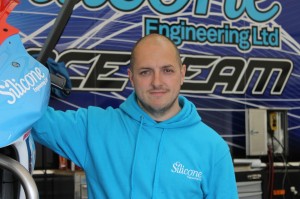 The three lap race would go onto prove a memorable one for Russ with third place achieved following a highly accomplished and battling performance.

2014 has seen the rider who made his Manx Grand Prix debut back in 2007 have arguably the best season so far in his road racing career which has included been runner up in TT privateers championship, 5th place finish in Southern 100 solo championship, top ten finishes at North West 200 and Ulster Grand Prix.