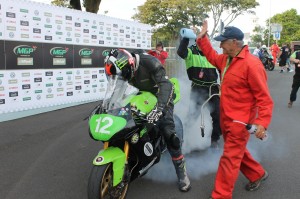 James Neesom achieved the biggest win of his road racing career so far winning the 2014 super twins Manx Grand Prix. Competing on Centurion windows backed ER6 Kawasaki James who made his mountain course debut last year carried on his impressive form from practice week into the race as he produced a great all round performance.

The 2014 road racing season has seen James impress throughout with many top quality performances which include senior support victory at Cookstown 100 and top three finishes around Oliver’s Mount.

He is planning to compete for the first time at the Isle of Man TT in 2015 in superbike, superstock, supersport and senior TT races. Amongst the new breed of road racers tipped for multiple international road race successes in the future James is greatly looking forward to next season as he bids to continue his excellent progress on the roads.