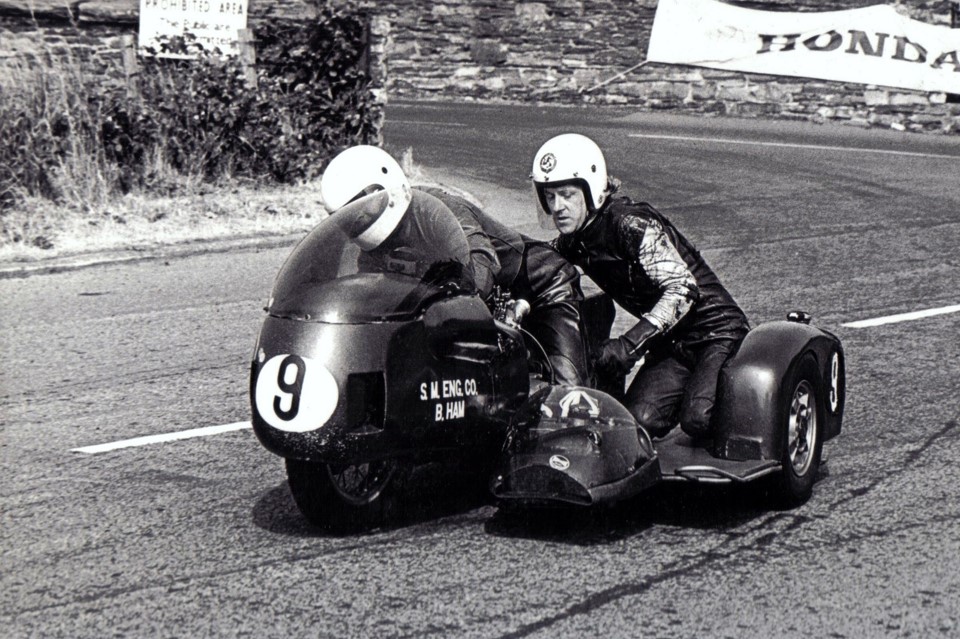 Ralph’s latest tale takes us back to the Southern 100 of 1975 and the showpiece Sidecar Championship race when he was competing alongside Mick Wortley.

Mechanical woes, Trident machinery, giving it everything in race honours pursuit are just some of the aspects surrounding this Billown based story, which Ralph recollects:

“All racers have a place in their toolboxes where these strange mischievous things hide until they decide to spoil your day. They had decided to pop out of the box at this meeting and really cause chaos.

They made their first appearance on the last lap of Tuesday practice about an hour before the first Sidecar race of the meeting. I was competing as passenger to Mick Wortley on his MDW Trident.

The outfit was going well up until then and quite fast with its 956 cc engine. Exiting Castletown Corner onto the finishing straight a disturbing noise came from the motor, hence the puzzled look on my face.

After checking in the paddock, the intermediate timing gear had cracked, and with no spare, no race that evening for us.

Next day racer John Stanley who was at the meeting as a spectator, offered to us his Trident road bike that he had ridden to the event and said we could remove what parts we required, as long as we built back up so as he could return home after meeting Magic.

Thursday morning was spent partially stripping down and removing the parts from the donor bike and rebuilding our race engine and getting the machine ready for the afternoons Championship race. After a quick start up and check over everything seemed to alright.”

After the parade lap to the start all the outfits ready for the for the push start to the nine lap race. The entry was mostly four strokes, Norton’s, Triumphs, BSA’s, Weslakes’s and a few Imp engined machines. A couple of Konig’s were the only strokers.

The weather was fine and bright, and the flag dropped and away we all went, being away in the first half dozen as we raced down to the first corner at Ballakeighan. First lap everything fine and passed one other machine.

Second lap was going well until rounding the right hand Ballabeg hairpin, when the primary chain case decided to leak all its oil unto the sidecar platform unknown to me.” 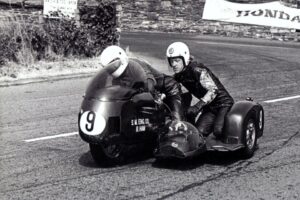 “As I got back into the chair I immediately shot out into the road on my back, holding on tightly with my right hand. First lesson to learn when passengering, always have a least one hand gripping never let go off both together.

Right behind me was, inches away an outfit, the driver’s eyes on stalks as I decided what to do. Two choices, let go and be run over or try to get back in. Split second decision made to get back in but not simple.

Turned myself over onto my stomach and with the power of the world’s strongest man, as Mick slowed for the following bend pulled myself forward and grabbed the top frame rails with my other hand to arrive back in the chair.

My sudden grabbing had dislodged a plug lead, which I replaced then settled down to normal. This plug lead decided to detach every so often as the cap was cracked, so another thing to deal with.

As the race continued, we eventually caught the outfits in front and starting the final lap we had moved up to second place. Just after the Iron Gate we were just behind the leader and ready to take the lead, and dreams of a win, when all three bell mouths on the carbs decided to fall off, taking the top end power with them.

Managing to keep going at a reduced place we reached the final corner at Castletown Corner still second but pipped to the finish by yards to end up third.

Back in the paddock, every point of contact grazed and bruised and painful, and glad to have survived the race but disappointed to be third.

Job not finished yet as when the outfit has cooled down, we have an engine to rebuild so the kind John can return home on his bike. Eventually everything finished and time to go home. Missed the prize presentation and no beer the pub was closed by the time we were done.

Finally driving home, tired, sore and in pain Mr Plod stopped me to see if I had been drinking. Not tell you what I said, but the last word was off. As you can see the gremlins’ had an exciting day at Billown.”