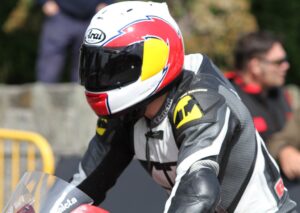 Paul Baleta is bidding for more excellent results at the Manx Grand Prix in 2015. Paul who made his mountain course debut back in 2005 enjoyed an excellent two weeks action at this years Manx GP which included highly creditable ninth place finish in super twins race.

Plus the SV650 Suzuki mounted rider finished the leading non Kawasaki mounted competitor in what was an enthralling race which saw James Neesom claim his first victory at the iconic road race.

Senior race would prove to be even better, competing on an Aprilia eighth place finish was sealed following a tenacious and determined performance. 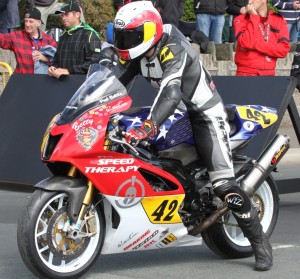 This result was not only Paul’s personal best finish at the Manx Grand Prix it was also the best finish by an Aprilia mounted rider so far in the 2010’s on the most famous road racing circuit in the world.

The inaugural classic TT races in 2013 saw Paul claim hugely respectable 14th position in formula 1 classic TT, ever since making his debut in 2005 the rider who has competed on a wide ranging array of different machinery has always returning to the road race circuit where iconic moments always happen.