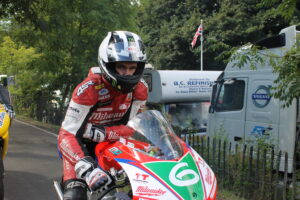 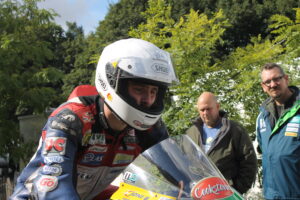 The opening 250 race at this years Scarborough gold cup produced a sensational battle for victory between Michael Dunlop and William Dunlop. Throughout the race Michael Dunlop lead but William Dunlop was giving it everything in what was a fitting race that marked the end of 250 racing at Oliver’s Mount. Behind Michael and William was Ian Lougher who held third place competing on Brian Scott’s RS250 Honda, this 250 race really was a classic race with the leaders separated by not much as the race entered its final lap.

At Mere harpin on the final lap William Dunlop was beginning to reel Michael Dunlop in but as both crossed the finish line on the final of the race it was Michael Dunlop who took a fabulous win on the Cookstown/Burrows engineering RS250 Honda. William Dunlop finished in second place whilst Ian Lougher completed the top three finishers. A truly memorable 250 race which had the crowd at Oliver’s Mount excited and entertained throughout. Over the years many a fine 250 race has happened at Oliver’s Mount, the opening 250 race at this years Scarborough gold cup was no different.