Those who kept a close eye on the recently revealed provisional 2021 IRRC Supersport, Superbike entry lists will have noticed the inclusion of improving next generation Welsh road racer Mark Purslow.

Last evening I asked the 2015 Lightweight Manx GP winner, a few questions about his upcoming maiden IRRC campaign which if all goes to plan will see compete for the first time at venues including Imatranajo, Horice and Circuit De Chimay.

Commenting about how the chance to pilot BMW, YZF R6 Yamaha machinery for Never Be Clever Racing at IRRC rounds in 2021 arose, he stated:

“The team contacted me via social media and we arranged a meeting pre lockdown, so quite a while ago now! and we then agreed on a deal.”

As previously mentioned Purslow’s first taste of IRRC competition will co-inside with first appearances, at a selection of mainland Europe’s top closed roads venues and he’s ultra looking forward to taking on these new challenges.

“Well I’ve watched it online and thought I Would like to do that one day but as all my other racing was clashing with it I never have had the opportunity.

So it’s kind of worked out ok that most of the Irish and Isle of Man races have been cancelled due to Covid. I’m still gutted that they have been but I finally have the time and opportunity to race the Championship with Never be clever racing.” 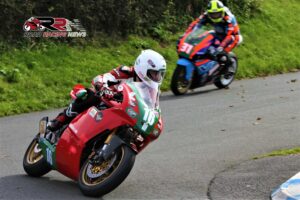 Adding his thoughts on which of this year’s IRRC series hosting venues, that he is most excited about sampling, he candidly stated:

“Oh that’s a tough one I’ve watched a lot of on-boards of the various circuits and I haven’t got one yet. They all look great and I’m just excited to be able to race the full Championship if everything goes to plan.”

The final question that I posted to Purslow, who took top three finishes at last year’s Gold Cup meet at Oliver’s Mount, Scarborough, was are there any particular results that are targeting during your first IRRC campaign?

“Well I don’t want to just gain a solid result or two but I will say that I’m going to compete and not just take part so watch this space.”